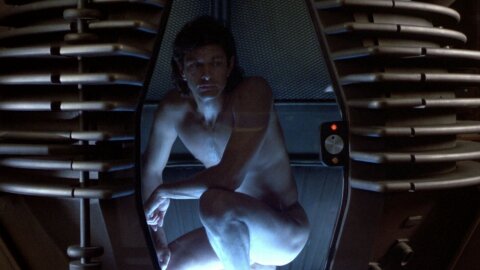 Body horror, biological horror, organic horror or visceral horror is horror fiction in which the horror is principally derived from the unnatural graphic transformation, degeneration or destruction of the physical body.

Cronenberg! And Carpenter! You may recall some similar horror themes from our episodes on Event Horizon (though that concentrated rather on the cosmic horror) and The Thing.

More like mad “project manager,” as he describes himself. How refreshing to see something sidestep the trope of the omnicapable super-scientist and have someone NOT create world-changing supertech by themselves. The art of the kludge/bodge.

It’s basically a genie! Rules-lawyering a computer is programming a computer. The nature of this interpretive computer system and the feats of artificial intelligence that enable it to coherently fuse Brundle and fly together.

Materials-detection, DNA analysis, and black-box DNA recombination algorithms. That’s a hell of a design. And the voice recognition isn’t too shabby, either.

How do we tell between species by DNA these days? DNA barcoding! Find a good, differentiable locus and make a database of that area for a certain type of earth life. Where do we keep the database? The Barcode of Life Data System.

Animate vs inanimate. DNA fusion or DNA damage and how and when problems could manifest. Expressing or ignoring large chunks of odd DNA. The unlikelihood of coherent expression of fly-like traits from the fused fly DNA. Junk DNA and its influence on our robustness against fly fusion.

Turning into a fly