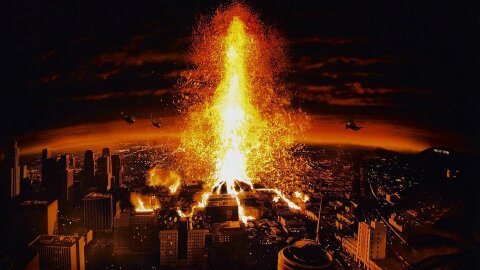 What is a volcano?

No, seriously, what is a volcano? A lot of film critics at the time whiffed on this one and at least one or two of us were in the wrong too. Volcano:

A vent or fissure on the surface of a planet (usually in a mountainous form) with a magma chamber attached to the mantle of a planet or moon, periodically erupting forth lava and volcanic gases onto the surface.

Predator/prey capture ratios. Biological activity causing the bubbling and subsequent discovery of a bunch of different bacterai that live in there. Larger things we find fossilized there:

The different fault types and which of them tend to manifest volcanoes. Spoiler alert: LA has a transform fault which is the kind that is really really really unlikely to sprout a volcano under normal conditions. Transform faults

Pyroclastic flow vs lava. The eruption of Mt Vesuvius in 79AD. Casting the cavities that surrounded trapped bodies. Cast of a pompeii body