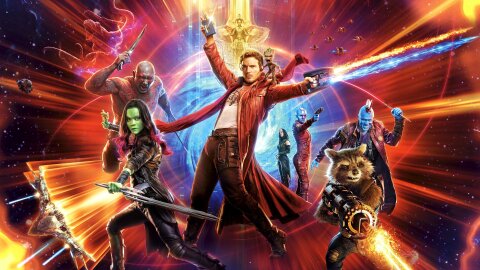 Colorful monster breath. Aurora borealis or australis and how the solar wind interacts with our atmosphere at the poles. How “confetti breath” is a better name than “Taserface” and how Taserface looks like Mr Lordi:

Drax’s misunderstanding about “thickness,” and our approval of his intuition that the inside might be easier to pierce. Pick a meatus. And… it can be gold! How not to die from using bodypaint.

The gold people with the gold parts. Grills? Genetic design of a whole civilization and levels of caution for personal safety graphed against length of life.

For once in space-scale scifi: drones! The levels of cost and complexity when designing craft to safely transport squishy humanoids. Galaga!

Hexagons! And what they reveal about interstellar travel in this universe. Space straws.

Escape velocity and atmosphere and centering your vulnerable mass. The life lost when a creature that lives for eternity is vanquished. Inability to take on perspectives.

Empath vs telepath and imagining how this ability could communicate “emotions” but not “thoughts.” FMRI. Lizard brain. Fight or flight. Side-channel data leakage and influencing the system via things like Trans-cranial direct current stimulation.

A Yondu-appreciation party and exploring the control of the arrow via the fin. Controlling the arrow not by his whistle but by direct bionic neuro-feedback.