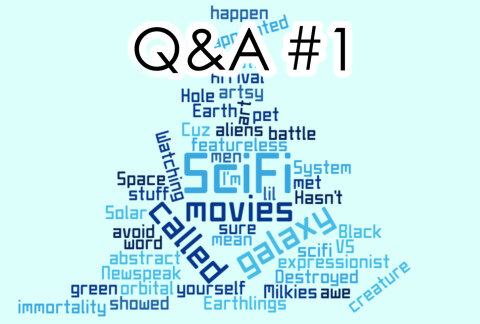 What: Our first Q&A episode! Wherein we answer the MOST INTERESTING QUESTIONS FROM THE INTERNET!

“What would you do for immortality?” (Question from CF Villion on Twitter)

“#SciFi #Space: what would happen if a #BlackHole showed up in our #SolarSystem?” (Question from Maxime Duprez on Twitter)

“In SciFi movies we are Earthlings but what about galaxy VS galaxy stuff. What would we be called? Cuz I’m not down with being called Milkies” (Question from Michael on Twitter)

Earth-centric point-of-view. Milkies? Maybe the aliens can call us “milksopp.” Don’t forget there could be many many other intelligent species amongst the hundreds of billions of stars in our galaxy, though.

Messy. Defining what we mean by orbital. Flotsam and jetsam. Yet more references to Seveneves. Kinetic weaponry and orbital bombardment.

“What would you do if you met yourself? Would be disappointed or in awe?” (Question by Nick Temple on Twitter)

Not liking oneself from the outside. Antisocial magnets of the same polarity.

“If you could have any creature as a pet from SciFi, what would it be?” (Question by Cameron on Twitter)

Ethical implications with trying to take in a creature of unknown intelligence as a pet. Bad pets: Dune sandworms,

“Why Hasn’t Some Disaster Destroyed The Earth?” (Question by MysticInvestigations on Twitter)

Impactors. Protections offered by our moon, Jupiter, and other bodies in our solar system. The formation of our moon, with accretion disks and whatnot.

“Which Newspeak word do you like most? Why?” (Question by David Rozansky)

“Watching Arrival. Why do artsy scifi movies have abstract expressionist art aliens? I mean sure, avoid lil green men, but featureless?” (Question by vgr on Twitter)

We worked a lot out about the aliens from arrival in our two episodes. Alien morphology. More anthropocentrism. Invisible (to us) differentiating markings. Here’s a whole blog dedicated to seeing through the eyes of other creatures in their own areas of the spectrum: Photography of the Invisible World.