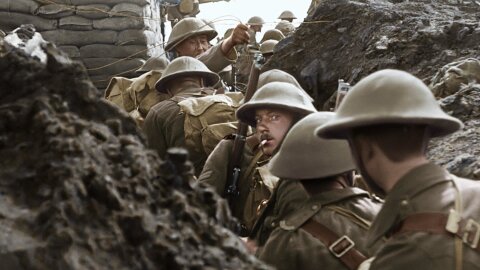 They Shall Not Grow Old: film restoration, persistance of vision, and vfx

Well, we don’t normally do this sorta thing, but oh man this was so good! What the film is about, how it is about, and why it was so special. Appreciating those who do the best work of making history relatable (cough Dan Carlin cough).

Film degradation. Scratching, exposure, shrinkage, physical tearing. The crapshoot that is video frame rates in early 20th century film footage. Crank cameras and gearing and compressed-air constant-framerate cameras. Correcting for all of this and the challenge of bringing it all up to a standard 24 fps.

Film is an illusion

Historian types and objections to the “enhancements” introduced by the filmmakers. Art vs education and the importance of relatability. Modernizing history. Colorization. 3d-ification. Finding it hard to complain about digital enhancement and remastering which leaves the original materials untouched.