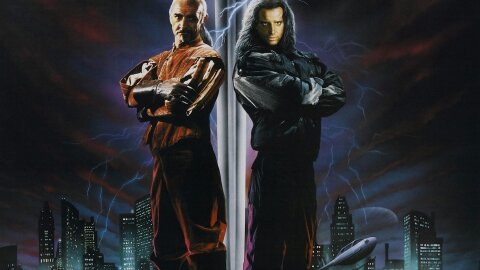 Taking a simple mysterious mythology and explaining it for fun and profit*.

The original Highlander’s original, surprising success story. Deciding to make a sequel. Budgets and revenues and how did we get here, really?

Aliens vs time travel. The clincher: neither actually makes any more sense than the other.

Not only Connnor MacLeod of the Clan MacLeod, but ALSO his best friend who totally just died in the last movie. but hey, lol jk it’s a kind of magic. Ol’ Ironsides hamming it up and honestly stealing the show. Recasting Highlander 2 with characters from The Room. The 80s/90s: when bad guys were really bad guys and just didn’t need a reason.

The actual environmental problem that the world actually got together amd potentially resolved! Fixing the ozone layer. The “shield” in the film and blocking all of the visible light in addition to the UV.

Some scenes from this film were truly mind-boggling and/or amazing and it’s hard to tell which were which. Ironsides ham. The car scene, OR sacrificing Yoshi to make the jump. Sean Connery being rogueish/trash on a plane. Scottish fan-death. Offscreen sword-switching antics.

* not really very much profit tbh